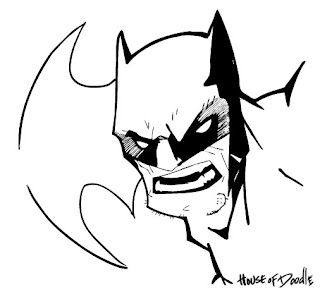 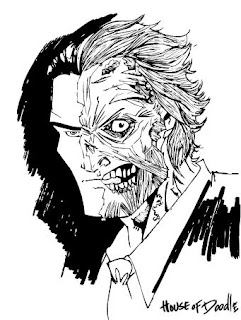 Okay, so I've had these drawings meandering around my work space for over a year now. My guess is I did these at work before my class sometime after The Dark Knight. Which to this day I still have mixed emotions that seemed to surface the other day while out with some friends who share the same ideas over nachos and Starbucks. As much as I enjoy the fact that comic based movies are in the fore front of entertainment, does Batman really need to have a lisp? I mean seriously how is a grown man dressed in rubber sounding like Daffy Duck intimidating? I blame mask, the mouth/ jaw area was too small forcing Christian Bale's tongue to swell or cheeks to push it. Or maybe I just have an issue with the mask design. But I digress and the film as a whole is a great comic action adventure, like I said before "mixed emotions" so don't get the wrong idea.

Anyways, hours after the nacho laced Batman conversation while sifting through some scattered papers and drawings I needed to file or throw away I came across these drawings. Just a few simple doodles that have now taken me over a year to scan but as you get to know me, you'll notice this happens a lot. Most of my doodles don't get such special treatment but hey, I'm willing to change. 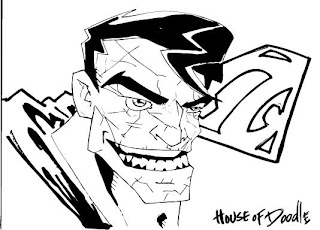 Just for fun b/c Bizaro was with the others.

Doodle
Posted by DOODLE at 9:38 PM